Chen joined the firm in October 2017 as a contract attorney in the immigration group, where she helps with business and family-based immigration. 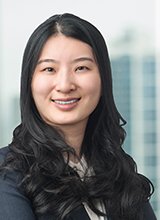 Chen received her Juris Doctor from the University of California Los Angeles School of Law in 2017. While in law school, Jen played an active role in several organizations. She served as the editor of the Pacific Basin Law Journal, researcher for the UCLA School of Law Library, and as volunteer at the Legal Aid Foundation of Los Angeles. Jen was also the recipient of several academic awards, including first place for the Lowell Milken Institute-Sandler Prize for New Entrepreneurs where as a member of a three part team, she obtained $70,000 in first round funding for a medical startup.

Jen gained valuable experience externing in the chambers of Justice Sheryl Gordon McCloud of the Washington State Supreme Court as well as working for boutique firms in Beverly Hills and Seattle.

Get in Touch with Our Team Today